As dengue fever in Majuro declined this past week to fewer than 10 cases daily for the first time since mid-October, an outbreak of flu has hit the capital city, stressing already taxed hospital services.

Hospital officials said with the dual dengue and flu outbreaks, they are running through medical supplies at double the usual rate and have sought donor help with looming shortages of IV saline fluid bags and other supplies.

Team Rubicon, a United States-based medical emergency response group, flew in the first team of nurses last week to assist Majuro hospital meet the demand for services, with two more teams of doctors and nurses from the US scheduled to arrive in Majuro over the coming weeks.

All the beds at the hospital have been full, with the hospital putting patients on cots and in doctor offices for lack of inpatient space to accommodate the number of patients seeking treatment on a daily basis, said Health Secretary Jack Niedenthal.

"We had 230 people come to the emergency room over three days," said Mr Niedenthal. "One doctor saw 65 patients in the outpatient clinic this week."

Mr Niedenthal described the hospital as looking like "a war zone" and added they are dealing with the dual concern for providing needed health services for patients as well as taking care of the health of health workers, many of whom are overwhelmed having been working long hours for months because of the dengue and now flu situations.

"The hospital has been overwhelmed with flu cases on top of the dengue outbreak," he said.

The flu outbreak has hit local schools hard, with one small private school canceling all classes this week when all but one of its teachers fell ill. Most schools have remained open, but Delap Elementary School, the second largest in Majuro, said they recorded 98 students and 15 teachers out with flu in the first few days of December.

Meanwhile, the dengue fever outbreak has not ended for Majuro.

Ebeye Island, where the outbreak started in July, has shown almost no cases for the past month, indicating the problem has virtually come to an end there.

But Majuro had been averaging a dozen dengue cases a day through mid-November, when the numbers spiked to an average of over 20 a day at the end of November.

The number of cases has now moderated to about seven a day.

The Taiwan Embassy in Majuro responded to appeals from the Ministry of Health for an emergency shipment of saline solutions, with Taipei's Shuang Ho Hospital dispatching 250 cases of saline IV bags that are expected to arrive next week. Other donors are also assisting with supplies.

In addition to the twin outbreaks, the Ministry of Health for the past month has been ramping up its measles prevention efforts in response to the outbreak in Samoa and spread of cases to other countries in the region. 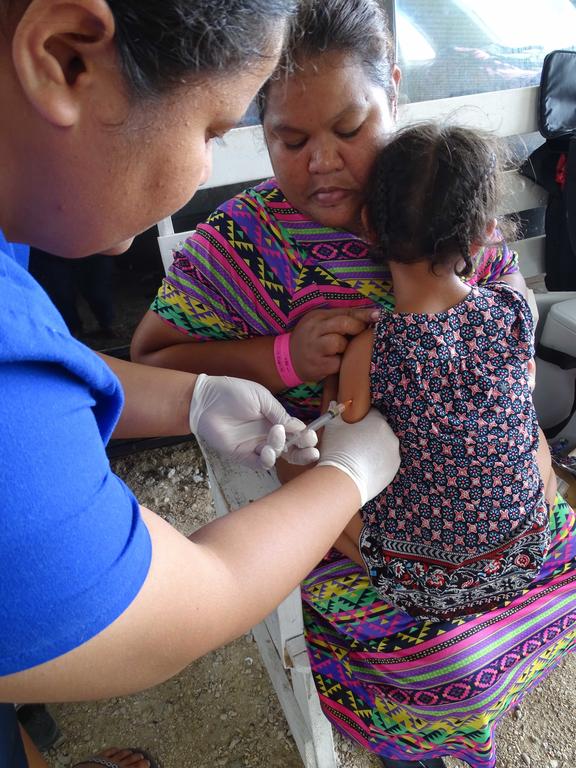 Public health nurses have been going house-to-house for over a month dispensing measles vaccines to children five and under.

This Saturday, the ministry has scheduled an outreach vaccination event in one of the large communities of Majuro to increase measles vaccine coverage, as well as administer flu shots and Vitamin A for children.

The ministry also issued a travel advisory last week, requiring that anyone traveling to Samoa, Fiji and other countries with confirmed measles cases must have a measles vaccine at least two weeks prior to departure.